Growing up as a kid, one of my favorite things to do was to think of the two biggest, baddest animals and ask my dad which one would win in a fight. It’s been a long time since I’ve entertained thoughts such as these, and I thought, instead of giving you a boring list of the twelve most influential marketers today (in my humble opinion), I would spice things up and indulge in some shameless tom foolery. Enjoy. 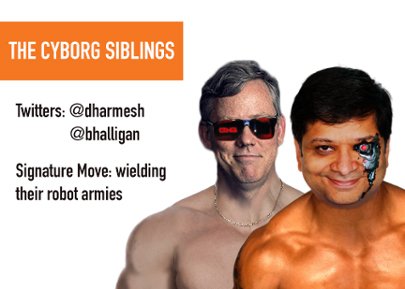 Brian Halligan and Dharmesh Shah – During their time at MIT, this dynamic duo suffered a terrible, life altering accident. Lucky for them, they invented HubSpot and thus were able to have their bodies partially reconstructed with HubSpot software. Their machinery is so well integrated that it is extremely difficult to tell what percentage of them is still actually human. They are now stronger than they have ever been before. They even have an army of blog writing robots. Luckily these two are altruistic semi-robots and use their powers for good. 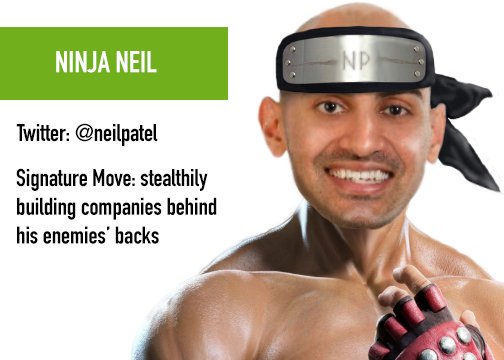 Neil Patel – Ninja Neil is fast, spry, and works undetected when he wishes. He founded and heads up Quicksprout, Kissmetrics, Crazyegg, and NeilPatel.com. Sometimes just for fun, he will sneak up on his enemies and build a company behind their backs without them even knowing he was there, just to put the fear of God in them. No one knows how he single handedly keeps all these companies afloat. Some speculate that he too employs a secret robot army. 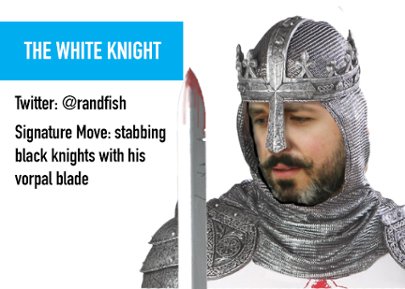 Rand Fishkin – The White helmed Knight from the land of SÉO is here to save every marketing damsel in distress from any ill mannered black helmed SÉO fiend. His white board is his battle ground, his marker his sword, and his beard his glory. 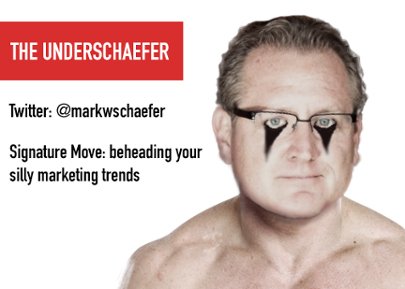 Mark Schaefer – The Underschaefer is where the buck stops. His foot is always down. Marketers tremble at the name. If marketers start to get a little too confident in the protection that their new marketing tool or trend provides them, The Underschaefer will find them, show them its flaws, and behead it right in front of them. He isn’t a bad guy though, once marketers see that their new thing wasn’t invincible, they are grateful to The Underschaefer for freeing them. He’s the hero they deserve, but not the one they needed at the moment. The Underschaefer has been known to take on all the hoards of the cyborg siblings at once. 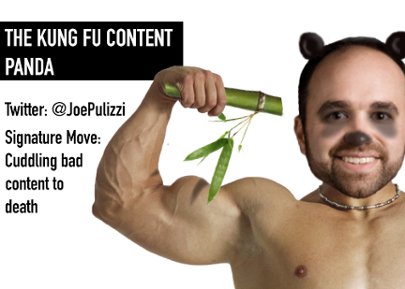 Joe Pulizzi – The Kung Fu Panda May look friendly on the outside, but he is the chosen one. He has long ago silenced the naysayers when he founded Content Marketing Institute. You can see him fighting the evils of sub par content on the interwebs today. 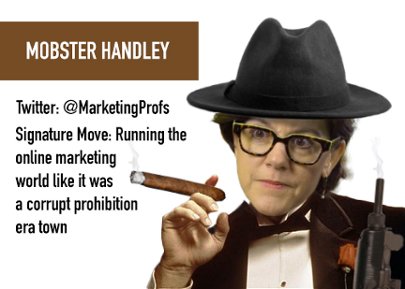 Ann Handley – she wheels, she deals, she eats her competition for meals. She uses a pin like Al Capone uses a fully automatic – rattling off award winning copy like bullets from an uzi. If online marketing was a corrupt prohibition era town, she’d run it. If her competition got her down, she’d gun it. Check out her latest heists at MarketingProfs. Don’t mess with her, you might get your mind blown.

Marcus Sheridan – Before the Sales Lion was a ferocious inbound and content marketer, some say he could single handedly turn a Serengeti water hole into a pool and then sell it to a roaming bushmen. When he is not eating inbound marketing gazelle for breakfast, the sales lion still sometimes sells pools. 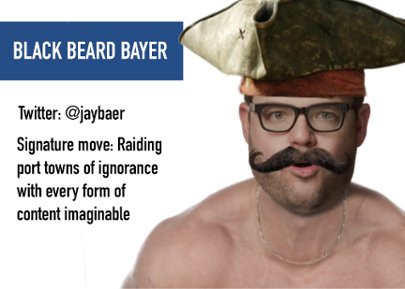 Jay Baer – Black Beard Baer is a legend on the seas. His vessel, the trusty sea skiff C to C, has never been outmatched on open water. He doesn’t have an army of robots, but a trusty crew of scallywagsthat are a match for any foe. He travels about, sharing his treasures with all who care to listen whether that’s speaking at a conference, sharing short form video, or writing a New York Times Best Seller. Your ignorance better keep a sharp look out, Baer is coming to destroy it. 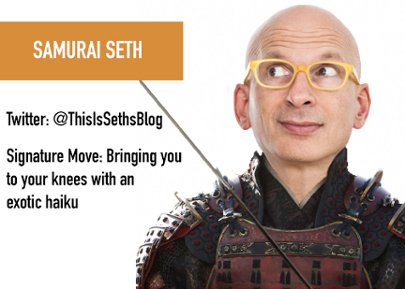 Seth Godin – Samurai Seth is one of a kind. He is a warrior of honor and poise. His blog is more like a collection of haiku than a marketing blog. While he has slain his thousands, he would sooner commit hara-kari than conduct dishonorable marketing. 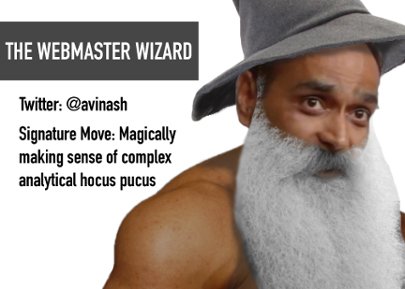 Avinash Kaushik – the webmaster wizard has compiled many scrolls on the arts of web analytics wizardry, a subject that is still hocus pocus to many marketers. His magic helps Google (the planet that all these marketers live on) revolve safely around its sun. Some say he is on a first name basis with Gandalf. 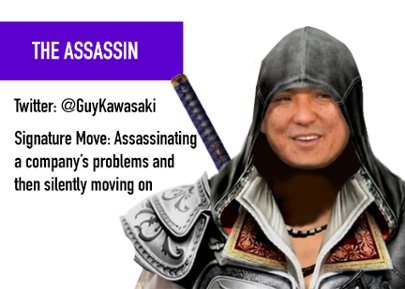 Guy Kawasaki – The assassin, like Neil the Ninja is a man of mystery (this is probably why he goes by the non-descript “Guy”). His role is simple, if a company wants to win a war, they hire Guy to assassinate their problems. Guy has been hired to do this for Motorolla, Apple, StumbleUpon, and now Canva. He has mastered many weapons: social media, publishing great books, blogging, and public speaking. There’s no better marketing Guy.

So now for the moment you’ve all been waiting for: who would win the fight?

The answer is…. Drum roll please….

It turns out these guys are lovers not fighters. Most of them know each other personally, many of them are buds. All of them got where they are through collaboration.

Gosh, what were you expecting? This is marketing not WWE. You violent person.

Other incredibly talented, influential, and follow worthy marketers include: Brian Clark, Michael Hyatt, Viveka Von Rosen, Ardath Albee, and many many more. For the sake of time and to not exhaust my readers, I decided to just stick to these 12. What do you think of my list? Who’s on your list? 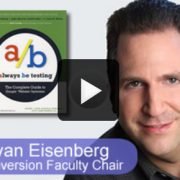 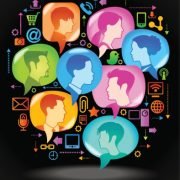 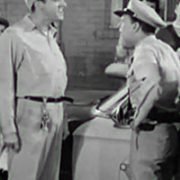 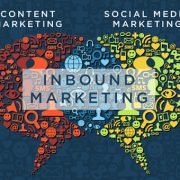 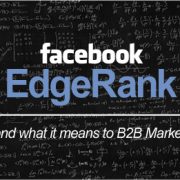 Facebook EdgeRank and What It Means to B2B Marketing

The State of the ‘Inbound State of Mind’ 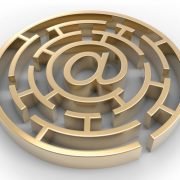 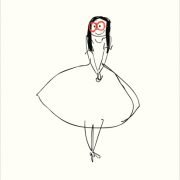 The B2B Content Marketing Fail, aka “the Twinkie Effect”
Scroll to top