This Weeks B2B Word on the Street is: IDEAS

I don’t remember his name, but I sure remember his story. It was one summer during college working as a physical therapy assistant at a rehab facility when I met a cool old guy with a great story. He was a patient recovering from a stroke, and he told me the tale while I was helping him exercise one day. 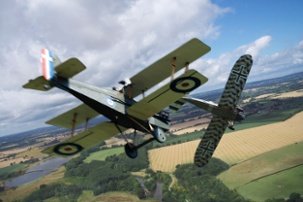 Just as World War I was breaking out in Europe in the early 1900s, this fellow was still a teenager in a small Southern town. He and his best friend were both popular guys, but they also had a sense of adventure, and a tendency to show off. They had heard somewhere that in Canada, young men were being trained as fighter pilots for duty in England’s Royal Flying Corps which later became known as the Royal Air Force.

Now, this was before the United States got involved directly in the war and, to two guys with wanderlust, it seemed like a fantastic idea. They imagined how exciting it would be to travel to Canada to become fighter pilots, and how the ladies would one day swoon over their heroic exploits.

They began talking about this one day in the local barber shop, and before they knew it, word had spread through the whole town. A parade was organized in their honor to wish them well on their way to aviation glory. They were too embarrassed to explain that it was all a lot of tall talk, and soon got caught up in the momentum of the big event.

Within a few weeks of sharing their big idea in the barber shop, they were both on a train to Canada with the whole town wishing them godspeed. Well, they did end up becoming pilots. And they also went to war. The happy ending of this story is that they both came home alive, and remained pals for the rest of their lives. The other flyboy even dropped by the rehab center one day to visit his old friend, and I was impressed with how they both carried themselves. Old as they were, they were still handsome guys with solid handshakes, and they both had a great sense of humor. They also had a great story of how even the wildest idea can take flight, even if you don’t really expect it to.