You may not recognize the laughing mascot of Bear Manufacturing, but your parents probably would. Hes become a little obscure in recent years, but he had quite a history.

The character was developed by the company sometime in the 20s and, over the decades, gradually became something of a folk art phenomenon. People like Arizona ex-con-turned-mechanic Moe Allen, who purchased equipment from Bear, began to paint the iconic image on the doors or sides of their body shops as a way to let customers know they carried Bear products. Allens artwork in particular became a local landmark  the friendly, almost crazed laughing of the cartoon animal serving as a beacon of quality auto parts, or that the nearest diner was left at the next light. 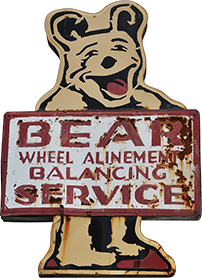 The bear continued to pop up in pop culture during the 60s and 70s when it was borrowed (without credit) as the basis for the Grateful Deads trademark Dancing Bear. The band denied stealing the logo, but its influence was obvious. Fortunately for everyone involved, Bear Automotive did not and never has had any interest in suing.

Today, Bear Manufacturing goes by the disappointingly generic Automotive Diagnostics, and has long since ceased using the iconic character. But you can still find one every now and then in the garages or offices of collectors  or on certain tie-dyed shirts.