If you’ve ever had a bottle of Johnnie Walker scotch, you’ve noticed two things: 1) You’re drunk, and 2) The label features a portrait of a dapper Edwardian gentleman in mid-strut. He’s known as the Striding Man, and was created in 1908 by renowned English cartoonist Tom Browne. Browne modeled the now-iconic character’s appearance after the brand’s founder, grocer John Walker, but also took some artistic license by transforming the mild-mannered shopkeeper into a monocle-toting member of high society. 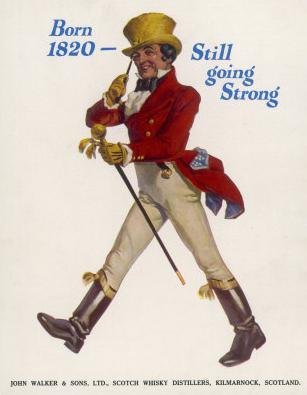 Browne specifically drew the Striding Man moving forward to symbolize Walker’s innovative thinking and never-ending pursuit of greatness. One such innovation is the very label on which the Striding Man appears, which is slanted at precisely 24 degrees to allow for larger type — thus giving it a more commanding presence on the shelf of your local liquor store.

But why should I tell this story when the company does such a great job itself? In 2009, Johnnie Walker commissioned British ad agency Bartle Bogle Hegarty to create a brand video outlining its history, called The Man Who Walked Around the World. This award winning short film features famed Scottish actor Robert Carlyle telling the tale of Johnnie Walker in one incredible take – during which, like the Striding Man, he never stops walking.

Think Outside the B2B Trade Show Booth
Scroll to top