Much as Marilyn Monroe was once Norma Jean Mortenson, and Cary Grant began life as Archibald Leach, famed ad character Speedy Alka Seltzer was born under a much less memorable moniker. 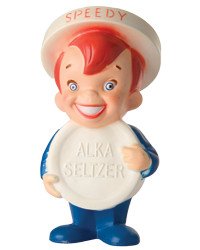 When Robert Watkins first sketched the miniature mascot for Wade Ad Agency in 1952, he called him “Sparky” &ndahs; that is, until the name was amended to promote the idea of “speedy relief.”

Rather than merely “representing” the brand, Speedy literally IS Alka Seltzer. His torso is one oversized tablet, while another sits atop his head as a sort of effervescent hat. The pint-sized pitchman popped up in magazine ads throughout the early 1950s, but didn’t truly become an icon until Alka Seltzer brought an animated Speedy (voiced by actor Dick Beals) into people’s homes via a long-running series of stop-motion TV spots. It didn’t hurt that his “Plop, Plop, Fizz, Fizz” jingle became stuck in everyone’s head almost immediately.

From 1953-1964, Speedy went on to appear in 212 commercials. He eventually acheived fame on an international scale, and was known as “Prontito” in Spanish-speaking countries.

The Buck Stops Here OR How I Learned to Stop Thinking

Is Twitter’s Sun Setting or Rising for B-to-B Marketers?

A B2B Marketing Idea I Proudly Salute: The B2BTOTY Awards
Scroll to top