Paul Kinsey is having a party at his place, and everyone at Sterling Cooper is invited. Except for Sterling. And Cooper.

Trying ever so hard to become hip between seasons, Paul has 1.) a beard, 2.) an apartment thick with marijuana smoke, and 3.) an interracial relationship that seems to be more for show than anything. That’s what Joan thinks, anyway, and she demonstrates her disapproval by saying something vaguely racist. (Then again, in 1962, “vaguely racist” was almost polite.) Out in the hallway, Paul’s old college roommate is trying really, really hard to take Peggy home, but she’s pretty terrified of male genetalia ever since one of them put a baby inside her, so she says nay. “I’m in the persuasion business,” she tells the guy, “and frankly, I’m disappointed in your presentation.” Epic shoot down.

The next day at work, we find everyone crowded around a radio, transfixed by a breaking news bulletin: American Airlines Flight 1 decided to make an unscheduled stop at the bottom of a lagoon, killing everyone onboard. Looking to avoid negative association by consumers, Don instructs the staff to pull every Mohawk ad immediately.

Pete soon gets word that his father (who hated him) had been aboard that flight, and will now be doing all his Pete-hating from beyoooond the graaave. He confides in Don, who tells him he should go home, because that’s what people do.

Later, Don meets with Roger, Bertram and Duck, all of whom want to make an immediate bid for American Airlines  presumably at Duck’s urging. Loyalty being something Don values highly (in the workplace, at least), he opposes ditching Mohawk. But for the first time, well, ever, he’s the odd man out. And not only that, it’s his job to give the soon-to-be-ex-client the bad news.

Next we meet Peggy’s immediate family for the first time. She has a sister and a very Catholic mom, both of whom have apparently been raising her infant son. 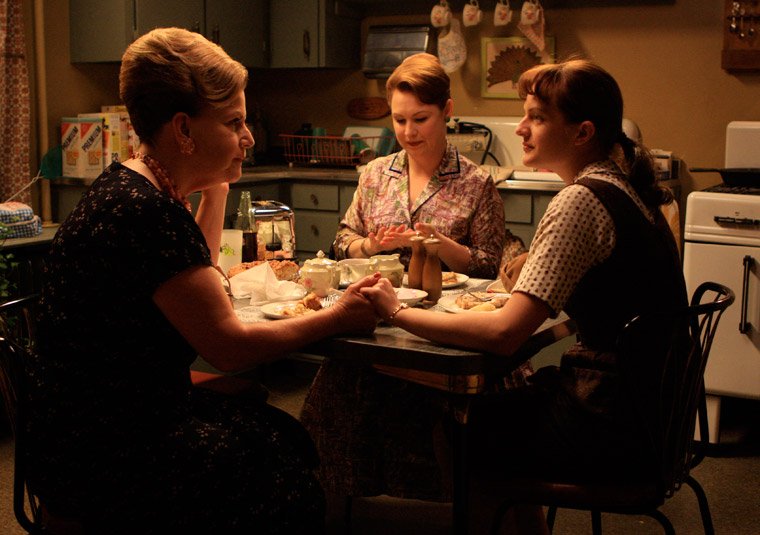 “So, you, uh… left your baby here again. If I didn’t know any better I’d say you were doing that on purpose.”

The next day at work, Duck offers Pete all the kind, consoling words Don could never muster. He also drops a bit of a bombshell: He’s meeting with American Airlines, and wants Pete to be the pointman. Though flattered, Pete says he’d be a little uncomfortable pitching to the air carrier that knocked off his dad.

That night, Don delivers the bad news to a Mohawk exec while dining at a Japanese restaurant. The Mohawk man is miffed, recalling Don’s personal assurance that Sterling Cooper wasn’t looking to court a big airline. They part ways, and Don briefly considers making a play for one of the waitresses, but maintains his fidelity. For now.

In another bar, in another part of town, Duck is pitching to an American Airlines exec when Pete (perhaps spurned by Don Draper one too many times) suddenly shows up after all, ready to use the death of his father to help broker some sort of deal. And sure enough, as soon as he mentions which plane perished his pop, the guy is all, “Hey lets hear some of those ideas.”

The final scene has Peggy grimacing as she’s handed her baby during Sunday mass.

Thoughts:
– In hiring Duck, Don may have been the unwitting architect of his own demise.

– Pete appeared to be a little more sympathetic than usual in this episode. The more we learn about where he came from, the easier it is to understand why he is the way he is. And while it may seem callous upon first glance that he use his father’s charred corpse as currency, the guy never gave him anything, so he really might as well.

– Much like the episode last season in which Don was turned off by a rival firm’s methods of recruiting him (which included falsely entertaining his wife’s fanciful notions of resuming her abandoned modeling career), we see once again that Don seems to have a strict code of ethics that not many in the industry adhere to. Having to break things off with Mohawk seems to fuel Don’s growing distaste toward the business side of things.

B2B Word on the Street: Budget