[Editor’s Note: This week kicks off a series of recaps for each Mad Men episode from Season 2. This week, we take a look back at the season premiere, “For Those Who Think Young.”] 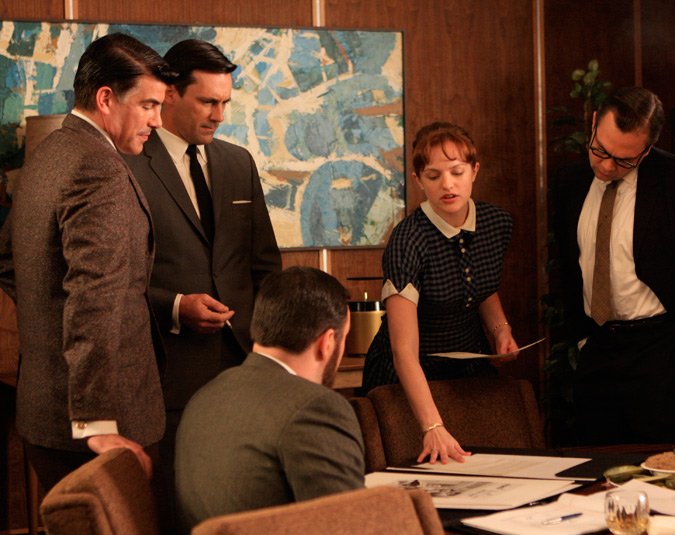 “Peggy, this is adorable, but I told you to bring us coffee.”

After a brief montage that reintroduces us to most of our characters (meek-secretary-turned-junior-copywriter Peggy Olsen, office bombshell Joan, conniving nitwit Pete Campbell and, finally, Don Draper’s wife Betty), we find Don at the doctor, getting some not-so-good news: His hard living is starting to catch up with him. Don looks pained to hear this, but that could also be because he hasn’t had a cigarette in like three and a half minutes.

The Sterling Cooper staff is super excited about the arrival of a primitive Xerox. And why not? Just last season, this sort of technological leap was nigh unthinkable. (In the pilot episode, Don even joked about a the existence of a magical copy-making contraption.) Meanwhile, in the conference room, the writers are brainstorming slogans for the agency’s latest account, Mohawk Airlines. Paul is sporting a really stupid looking beard, as well as about a million ideas that all involve Indian puns. None of this matters when Don arrives, though, because Don hates every idea Paul has ever had. Also Don seems listless and out of it after that doctor visit.

Duck, the new creative director Don brought on at the end of last season, is busy urging heart-attack-prone partner Roger Sterling to get some new blood on staff. (As per the title, look for this burgeoning youth movement to become one of the overarching themes this season.) Later, Roger tries to sell Don on Duck’s idea, to which he replies, “Young people don’t know anything.” Eventually he relents, agreeing to interview a couple of hipster types in turtlenecks.

It’s Valentine’s Day, and everyone’s spending it in different ways. Don and Betty stay at a hotel in the city, where Don experiences some unexpected bedroom difficulties. Ever the spoiled little child, Pete eats a bunch of chocolates and considers maybe possibly offering his wife one. Office closet case Sal hangs out on the couch with his shiny new bride – a far more impressive “beard” than the one on Paul’s chin.

The next day at the office, Pete has an irony-laced conversation with Peggy about the terrifying prospect of impregnating his baby-hungry wife. Last season, Peggy gave surprise birth (yes, surprise birth) to Pete’s illegitimate love child. He does not yet know.

That night on her way home, Betty runs into a spot of car trouble and calls a tow truck guy from Awkwardsexualtension Bros. Roadside Assistance. With only $3 in her purse, she decides to use her feminine wiles to get a discount – because overtly flirting with a hulking, lecherous greasemonkey on a dark, desolate road in the middle of the night couldn’t possibly end badly. Luckily, Betty arrives home safe, where she finds Don being uncharacteristically faithful and fatherly. Later, though, we see (and hear) him reading from the Frank O’Hara poem “Meditations in an Emergency,” which he slides into a mysterious manilla envelope and carries to the mailbox, to send to an unknown recipient…

Thoughts:
Don Draper is 36 years old. It seems way too early to start treating him like an old man. I do like what they’ve done with Peggy’s character, though – that she’s commanding a little more respect around the office. As for Betty, I get the feeling her little fetish for odd flirtation is going to lead somewhere extramarital this season. At this point she’d probably cheat on Don for a nickel off her next oil change.

B2B Word on the Street: Strategy