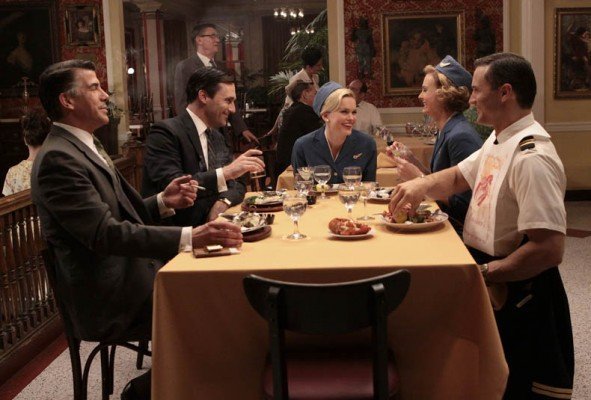 After a long break, Mad Men Memos are back for Season 3. But before we get into what happened in Sunday’s episode, here are some highlights from episode 1, “Out of Town”:

– Apparently it’s pretty redundant to make any ‘Dick’ jokes about Don’s given name, as it was, in fact, actually meant to refer to… that. Thank his vulgar prostitute mom and her grudge with the condomless John who impregnated her.

– To absolutely no one in America’s surprise, being pregnant hasn’t stopped Betty from smoking or drinking. Also she wants the baby to be a girl so that it will distract her from how much Sally’s chubbiness and suspected lesbianism disappoints her, which is infinitely.

– Peggy’s secretary is not so good at the secretarying, but better at swooning over one of the new British guys acquired during last season’s merger, making her one more ingredient in Peggy’s big pot o’ misery.

– Sterling Cooper fires the head of accounts, Burt Peterson, just in time for his ailing wife to probably die of cancer. The firings at Sterling Coop have apparently been going on for awhile between seasons, but the expectedness doesn’t stop Peterson from making a big fat angry scene about it.

– Pete gets promoted to Petersons’ position. Then Ken does too. Wait, what? There’s a hilarious scene in the elevator when Pete and Ken are both semi-congratulating each other without realizing that they’ve received the same promotion. They soon find out though, and all of Sterling Cooper’s accounts are divvied up between the two of them. Looks like its going to be a battle to the death. Or at least the unemployment line.

– Joan reiterates her plan, first expressed at the end of Season 2, to depart the advertising agency after her wedding.

– On a business trip together, Don and Sal make up fake idenities (something they both LOVE to do, in their own little ways) and dine with a pair of stewardesses from their flight. Don absconds with his, and ironically ends up telling her something true that even Betty doesn’t know – it’s his (Dick Whitman’s) birthday.

-Sal is about to go to bed alone, but not before calling a bellhop up to fix the AC. The bellhop looks to fix something else instead, and Sal, a closeted homosexual in his mid-30s, finally has his first gay experience. Unfortunately for him, the fire alarm goes off, and as Don and his paramour descend down the fire escape, he spots Sal in flagrante. But, like the secret-keeping guy that he is, Don doesn’t let on that he knows – though he does take the opportunity to ratchet up the tension on the flight back.

Now, onto episode 2, “Love Among the Ruins”: 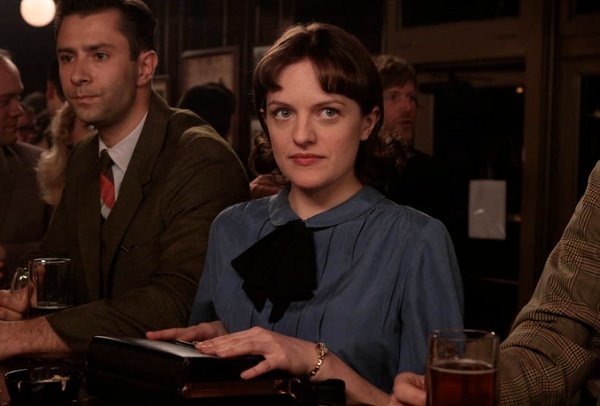 This episode felt more oddly paced than the last, mostly because of some ill-placed commercial breaks. But other than that, things are really getting rolling this season, which is a stark contrast to the series’ usual slow-burn structure.

It began with an overlong-for-my-taste clip of Ann Margret in Bye-Bye Birdie, who despite her undeniable beauty managed to get on my last nerve by caterwauling at an annoying volume and with bizarre enunciation (“Bird-hee?”). Did people really used to like that movie? The guys seem impressed, anyway, and Diet Pepsi wants Sterling Cooper to use the provocative clip as inspiration in devising a campaign around their new diet drink, which has the unfortunate moniker “Patio” (It’s a “working” name, apparently, but it needs to “work” on not existing).

Everyone is down with the idea except Peggy, who takes issue with what she sees as blatant sexism, apparently forgetting where she works and what year it is. She comes to Don, who advises her to abandon all pretenses of artistry, leaving her a little disillusioned with her occasional mentor. In an attempt to embrace her gender role, she croons the Ann Margret song to her mirror (in a slightly more tolerable way than the original), then hits the streets for a Don-like night of getting drunk and hooking up.

Pete gets off to a rocky start in his quest to outdo Ken for the head of accounts gig, thanks to a disasterous PR pitch to the guys who plan to demolish Penn Station to make way for Madison Square Garden. More accurately, it was thanks to Paul, who in his ill-advised attempt to “play devil’s advocate,” expressed a little (read: a lot) too much sympathy toward the growing backlash against Penn Station’s destruction. Don and Roger are tasked with cleaning up their mess. They patch things up with the MSG people, with the caveat that Paul is no longer allowed within a beard’s length of the campaign.

Just when things are getting back on track, Pryce (one of the Brits in charge since the merger) walks in to inform Don that London will be pulling Sterling Cooper’s involvement with Madison Square Garden after all. Don is livid at the missed opportunity, but there’s nothing he can do.

Roger clashes with his daughter over the prospect of bringing his young new wife to the former’s impending nuptials. But the biggest problem facing that wedding is an unseen one: it’s planned for what will be the day after the JFK assassination.

Betty’s brother William is in town with their increasingly senile father, Gene. William tells Betty he’s putting the old man in a home. Betty accuses her brother of trying to get his hands on the family mansion, and then it’s Don’s turn to swoop in for the kill. He pulls William aside and tells him in so uncertain terms that he will NOT be getting the house, and that Gene will be staying at Casa Draper for the time being, with William footing the bill. Unfortunately, Grandpa Gene goes from zero to crazy in about 30 seconds flat. Talk about your ultimate backfire.

B2B Word on the Street: No Retreat

In B2B Marketing, Don’t Just Sell Something, Solve a Problem
Scroll to top