One of our art directors at MLT Creative, Sean Borja heard on NPR this morning that today is the 100th anniversary of Theodore Roosevelt’s speech which included the famous quote about “The Man In The Arena.” 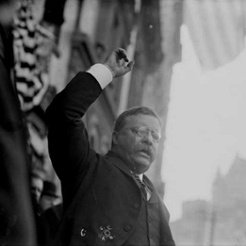 Sean knows I love this speech and in particular this quote and have it hanging on my wall across from my desk. I can’t help but look at it every day and a while back I wrote a blog post entitled Doer.  In the article I explain why the quote has meaning for me beyond the truly inspiring words it delivers

It is not the critic who counts; not the man who points out how the strong man stumbles, or where the doer of deeds could have done them better. The credit belongs to the man who is actually in the arena, whose face is marred by dust and sweat and blood; who strives valiantly; who errs, who comes short again and again, because there is no effort without error and shortcoming; but who does actually strive to do the deeds; who knows great enthusiasms, the great devotions; who spends himself in a worthy cause; who at the best knows in the end the triumph of high achievement, and who at the worst, if he fails, at least fails while daring greatly, so that his place shall never be with those cold and timid souls who neither know victory nor defeat.

I think the man himself was an American Treasure and I believe these words are a timeless kick-in-the-behind for any entrepreneur who needs to be reminded to buck up, take defeats along with victories and never quit learning from both.

I’m also sharing a link to the original speech in it’s entirety as it was delivered on April 23, 1910 at the Sorbonne in Paris, France.

B2B Blogging Webinar Q&A: How long before your blog becomes a bore?

What planning is needed to start my B2B blog?
Scroll to top